skip to main | skip to sidebar


This is me, attempting to marry my two disciplines:
Painting and Journalism.

Editor’s Note: Recent reports have shown that in some states, the number of police referrals to the Immigration and Customs Enforcement Agency (ICE) has nearly doubled in the past year. A report by TRAC shows that ICE has the highest number of referrals for federal criminal prosecution of all law enforcement agencies. In El Salvador, these deportees are affecting the culture of the nation with their Americanized ways, working at call centers and struggling to survive. Josue Rojas is an artist and writer from San Francisco’s Mission District. 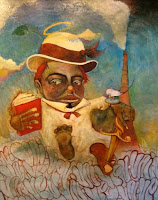 Salvadoran deportees, or DPs, have a few things in common: they think in English, they’re young and they’re influential. They’re importers of the culture they carry inside — the niche, regional culture of the American city they grew up in. Be it New York talk, L.A. talk, N’awlins or D.C talk… they speak it. Culturally, they’re intimately in the know of something else that is arguably the coolest thing in the hemisphere: Americana.


In a country celebrated in Central America as one of the region’s greatest friends to the United States (and often paraded as a flagship for development) the DPs' influence spreads. They are simultaneously embraced and rejected. They’re the cool kids that society hates to love — Central America’s most beloved, betrayed bad-asses.

The seven deportees I spoke to were not all members of the internationally infamous MS-13 gang. Instead they were rappers and artists; they worked to remove tattoos and manned phone lines at call centers. They’re marginalized in a marginalized country –– foreign bodies among the harsh antibodies of a prejudiced, hyper-conservative society still dealing with the duality of right-wing conservative culture and a stubborn attempt at a socialist revolution. Coming in by the tens of thousands each year, El Salvador is sweating from the fever of their infection. They’re the ones who couldn’t make it on the other side, yet they’re successful here.

Once you’re deported, you don’t fall into a black hole. Your life continues, and with it your dreams. Disappeared from North America and rejected by the mainstream in El Salvador, DPs emerge with a hybrid culture of their own. They haven’t lost the "American dream" –- they’ve just been deported along with it. 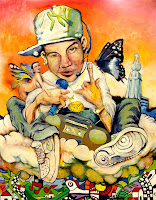 Frank “Fugitivo” Ochoa, 24, was deported from the Bronx in 2006. These days he divides his time between his work as a call-center operator and a local celebrity.

His day job –- a product of American outsourcing -– is working for the San Salvador-based SYKES, Inc., where he answers calls and arranges flight and hotel reservations so U.S. travelers can see the world.

Although grateful to be working in a “U.S. environment” (and to be well-paid by Salvadoran standards), Frank feels that outsourcing exploits his situation. “But what can you do? You’re deported, you got tattoos, you ain’t got no diploma that says you went to school over here…don’t nobody wanna talk to you.”

At night, Frank becomes “Fugitivo: The talk of El Salvador” – a hip hop MC and local reggaeton sensation. His music is featured daily on radio waves across the country.

Fugitivo has arguably every reason to be happy: He’s put on the celebrity pedestal, he has no lack of female fans, he’s got a steady income, owns a home and has a new son. Yet, he struggles inside.

“I haven’t been happy since I’ve been here. People think I’m happy,” he says, his otherwise silly demeanor becoming pensive. “But on the inside, I wanna change everything but I can’t.”

Fugitivo feels his influence is part of his contribution. “I want the kids to see that I made my dreams come true, no matter how I did it…. I did it.” When asked what dream he’s living, Fugitivo replies: “I’m living Martin Luther King’s dream. I’m living Fidel Castro’s dream… I’m living what you’re dreaming.” 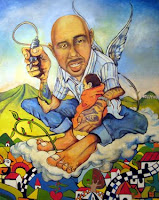 Though many DPs are depressed by their new lives, Alex Cornejo, 33, has chosen to make the best of it. He was deported after having spent the majority of his life in Los Angeles, where he grew up in the foster care system and was adopted by a Mexican family. He did not know he was Salvadoran until he was 17 years old. Alex served 14 years in prisons throughout California.

He sees his deportation as a new start. “Too many people focus their energies on trying to make it back. If they focused their energies on making it here, it wouldn’t be so bad.” Indeed, life in a foreign country is better than life behind bars.

As part of the Salvadoran government’s repressive measures against gang activities, tattoos (whatever the imagery) have been used to identify gang members. Even bearers of non-gang tattoos are subjected to profiling. The popular view is if you have a tattoo it means, “You’re a bad man,” says Alex. Nevertheless, he’s made a business out of what’s considered taboo and celebrates his success. Recently, he was voted among the top three tattoo artists in the country and most of his clientele are well-to-do. His business is twofold: It’s a booming tattoo shop as well as a tattoo equipment store.

Appropriately called “Taboo Tattoo,” his business is located in one of San Salvador’s most upscale neighborhoods. He points at a display filled with tattoo equipment and defiantly declares, “This is my pride and joy, because with this, I’m changing Salvadoran culture.”

A new father and family man, it seems Alex has a refreshing take on his DP status, “For what I’ve got here, I’m loving life. It wasn’t easy either… I fought for this. When you fight for something, when it costs you, you appreciate it.”

At 28, Glenda Urías is a mother of five, and having a difficult time adjusting to her recent deportee status -– she’s only been here for one and a half months. 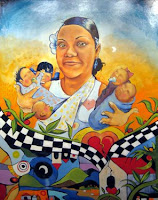 For Glenda, the hardest part about being in El Salvador is “being away from my family. The truth is that I don’t wanna be here… I see other kids and I miss my kids.”

But she is also struggling to find work. “I have so many skills and I can’t use them out here because, maybe my background of deportation or maybe because I don’t know the right people. So I can’t get a job. So I’m sitting here doing nothing, wasting my life away. And what good is that?”

Glenda also has trouble with the culture in El Salvador in regards to the treatment toward women. She’s used to “coming and going as I please.” When asked how people react to her American brand of feminine freedom, she responds, “Well, they have no choice but to react positively to it, ‘cause they know; that’s just how I came and I won’t change for nobody.”
She’s frequently on the phone with her kids and on MySpace chatting with friends.

When asked if during her conversations with her family, she tells them of her true feelings regarding what she’s going through, she responds, “No. I keep that to myself…I can’t tell them the truth, it’s too hard for them.”

Smokey, 26, was born in Chalchuapa, near the Mayan ruins at Tazumál. He has never set foot on U.S. soil, yet has absorbed U.S. gang subculture, as have many other youth who never left El Salvador.

Through influence and interaction with gang-affiliated deportees, L.A. gang culture has traveled and flourished here. “We want to make it known that this thing comes from far away,” Smokey tells me as he deciphers symbolism in artwork he’s done on a mural in his living room. Like the traveling gang culture, the Central American version of these symbols have evolved into a style distinctively it’s own. 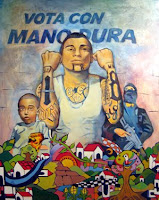 Holding pencils in his hands, Smokey says of his work: “The things you see are all things we’ve been inspired to do. We know that, whether we like it or not, we’re in this culture –- gang culture -- and for us, it is a culture. Daily, we live situations, experiences between the homegirls and homeboys or “cholos” as they are called up north… We assimilate these things… we’re a part of it. And right now, that’s what we’re living.”


Of life as a gangster in a country where extra-judicial killings of suspected gang members by police and paramilitary is commonplace, Smokey says, “A lot of times our lives are more trouble that fun. Because of the gang laws and our rival (gangs), but the reality of the situation is far worse that what I’ve just described to you.” His demeanor is meek, mellow. He speaks softly in a Salvadoran country accent despite his hardcore appearance.

Due to his gang affiliation and the tattoos on his face, it’s pretty much impossible for Smokey to walk the streets without being an overt target of rival gangs as well as police and paramilitary, much less secure a job. Smokey has a four-year-old son.

He makes a living painting cartoon figures on wood block cut-outs, using a jigsaw and paints as do many of the homeboys. Their wives and children sell them to tourists at the ruins.

Yo those paintings are fire homie. Especially the one with the "Palma" style homes in the foreground.